Well, that was satisfying.

Whatever your experience of the last week or six weeks of uncertainty with Tennessee football, and the smidge of uncertainty that crept into this basketball team in losses to Florida and Missouri…this, tonight, was (Fulmerized) certain.

Josiah-Jordan James hit a three at the 12:53 mark of the first half to give the Vols a 17-8 lead, a shot in the arm for Tennessee’s offense and its confidence. Kansas got it back to six with six minutes to play in the first half, then didn’t make another shot until the Vols turned it over in the final seconds before the break.

The defense is what we expect when Yves Pons is on the floor. Baylor played Bruce Pearl earlier today, which meant they lost their status as KenPom’s best defense even before the Vols tipped off tonight. Kansas was cold from three early, and that helped. But they also seemed extraordinarily aware of Pons, even though he didn’t block a single shot. There were no good looks available, and they didn’t force any bad ones at the rim.

In those last six minutes of the first half, Tennessee went to the well:

In those six minutes, Tennessee shot 7-of-10 against Kansas – 10th in KenPom defense coming in – and turned a six point game into 16.

To start the second half, Kansas went right in to David McCormack, who cut it to 12. Right back to the well:

Then Victor Bailey, who came into the game taking more shots than anyone in orange, took his first. A three. He splashed it, and suddenly the Vols were up 21. Then he made five straight free throws for good measure.

Defensively, the thing Tennessee is best at is forcing turnovers and blocking shots. Tonight: one block (a spectacular one from Josiah), and only seven Kansas turnovers. Yet the Jayhawks shot just 37.7% from the floor, 6-of-24 from the arc, and only grabbed five offensive rebounds on all those misses. A sterling performance from an already-elite defense, now the best in the land in KenPom.

The hope that Tennessee’s good shots from good ball movement would just start falling came partially true tonight: 52.8% from the floor, a disciplined 8-of-13 from the arc, helped along by a tidy 16-of-17 from the line.

But it was who took those shots that stood out most:

And the Vols made a shift in their rotation, going solely with Olivier Nkamhoua as the backup post option/eighth man, and giving him a green light. He only went 2-of-7 and had four fouls in 15 minutes, but it felt like there was affirmation in it from the coaching staff: if you’re going to play Nkamhoua, let him play.

We wondered what would happen if the Vols started and played the freshmen more. Small sample size, but good opponent, and the returns were excellent.

The hill remains steep: at Ole Miss Tuesday, at Rupp, a Florida team we already knew was dangerous that looked even more so today, then at LSU. The resume will be written over these next two weeks.

But the Vols made a statement tonight, and did so in such a way that makes you believe this offense has plenty left to give.

We’ll get to that. For now, at the end of this crazy set of weeks in the athletic department…I believe we’ll take every bit of this W tonight.

The most complete game against good competition this year! Go Vols!

Does this mean that we are now officially a basketball school?

Author
Will Shelton
Reply to  AlphaVol

Think we’ve been one for a while now!

I don’t think we can truly call ourselves a basketball school until this embarrassment is removed from the rafters. 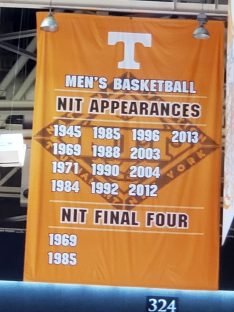 Author
Will Shelton
Reply to  HT